Dr Angela Robertson is about to head off to visit Paper Plus in Blenheim when I call to interview her.  At age 65, she’s much like the people featured in her new books – a long way from the traditional idea of ‘retired’. 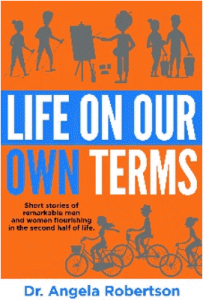 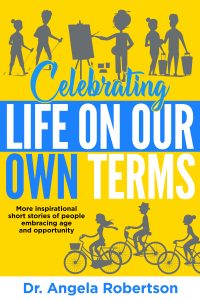 Both books are a celebration of life in your later years – and what’s possible with a positive mindset. From the 98-year-old ex-Air Force Officer and later NZ Diplomat in Russia that now spends his time painting portraits in Nelson and likes to do parachute jumps on significant birthdays (he intends to do one on his 100th, just as he did for his 90th), to the man making coffins for people from his retirement village on the Kāpiti Coast. Then there’s the former nun (now married) who sits on the executive of Grey Power.

There are short stories of people who have finished up their work life careers to use ‘retirement’ – and in some cases their superannuation money – to launch start-up businesses, doing everything from starting coffee carts (and traveling to Rwanda to work with the coffee growers), to companies providing social connections for those aged 55+ such as Chirpy Plus.

The self-published books are part of Robertson’s Older and Bolder series, with a third one in the making.  They came about after she had a go at semi-retirement herself with the aim of spending more time with her husband.

“Then I realised that some people hadn’t retired. Or they had retired for about two weeks but thought ‘no, that’s not for me’.”

People kept referring Angela to other people to talk to and she found their lives so inspiring, she offered to write their stories for them. Soon it became apparent there was a book or two in the making to encourage others to maximise the second half of life.  She began trading short stories for a jar of plum and apple jam and a “fancy copy” of the published book.

“People would say – ‘oh, you should talk to so-and-so’ and they would say, ‘I’m not an interesting person’, and then actually you would find out they were,” she says.

While the first book is focused on those aged 65-98 years-old, with many based on the Kāpiti Coast where Robertson lives, the second book looks at people from their mid-50s to mid-80s, with a broader geographical spread around New Zealand.

Having worked at places like the Department of Internal Affairs and Massey University as a professional development practitioner, Robertson is used to focusing on developing others and helping them to find fulfilment. However, she has found inspiration herself through her books.

“It’s become quite a big passion project of mine. I’m inspired by these people – this is how I plan to age,” she says.

“I’m going through a transition myself. For me now its about writing and encouraging people to be the best they can be and to lead fulfilling lives.”

Robertson says there can be a lot of anxiety about turning 50, 60 and 70. However, people can have decades still to live and many have more choices than they’ve ever had once the heavy-lifting of caring for families and maintaining careers recedes.

“This is an age of opportunity. Everyone has some activities and projects they’d like to pursue, relationships they’d like to develop, and unfulfilled ambitions that we can now undertake. What were they? What did you always want to learn, do, or where did you want to go to?  It’s never too late to start!

“You can say ‘oh yes, but…’ and have a reflective life of disappointment, or you can look forward with gratitude. Ageing is a mindset and how you feel about that impacts on how you age.”

Celebrating Life On Our Own Terms will be launched on 29th September at the Council Chambers in Levin (1-3pm).  A second event will also be hosted on 30th September at Te Newhanga Kāpiti Community Centre in Paraparaumu (1-3pm) to help accommodate safe social distancing.

The latest book will be available from Paper Plus stores, from Robertson herself and online from Fishpond.  It’s also available online in ebook and Kindle formats.